THE STORY OF MRS AENEAS GUNN - The Later Years

Into her old age she lived a quiet, retiring life at 26 Manningtree Rd, Hawthorn enjoying reading from her extensive collection of books and tending to her ‘modest but ordered garden’.(124) One interviewer who visited her there wrote an illustrated description of the interior of her home writing: ‘A portrait of Queen Victoria hangs on a wall, heavy cedar furnishings and carved chairs finished with velvet fill the vastness left by that lofty nineteenth century ceiling. Bookcases filled with books...give to the walls that studious dignity one would naturally associate with a lady of letters’.(125)

And a 'lady of letters' she certainly was. Over the years she kept in touch with many of the real 'characters' she had so warmly portrayed in her books until in fact she became the last one left. As for Bett Bett, throughout the years Mrs Gunn continued to keep in contact with her and each year without fail they exchanged best wishes and Christmas greetings.(126) Although they had spent only a short time together Mrs Gunn had formed such a strong bond with Bett Bett that it was to last her lifetime. As for the Elsey, she showed no emotion when told it was up for public auction. ‘Why should I care tuppence?’ she asked one reporter: ‘I've got no interests up there now, and most of those I knew have passed on’.(127) She never returned to the Northern Territory and the land of the 'Never-Never' she had written so affectionately about. 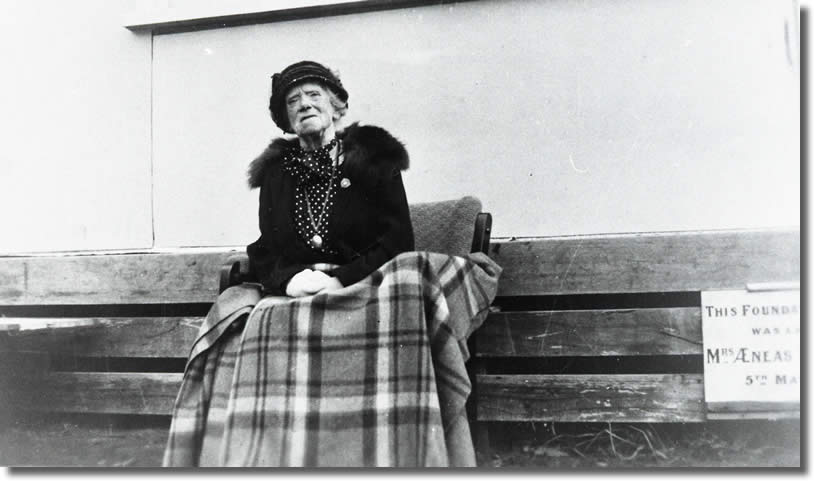 1954 - Mrs Gunn next to the foundation stone she had so proudly unveiled for the Monbulk RSL.Her sister Lizzie passed away in 1959 leaving Jeannie to live alone at their home. She was troubled by health problems and wrote to Cec Wellington when doctors ordered her to stay inside regretting not being able on Anzac Day ‘to go to my favourite place at the barriers to see you all go by’.(128) One of her Hawthorn neighbours, Mr F Kiefel, remembers: ‘many of the people in Manningtree Rd used to call at her home and listen to her talk of her early days at Elsey Station in the Northern Territory. She was a wonderful old lady, an alert mind and a memory that never seemed to falter’.(129)

Mrs Aeneas Gunn OBE passed away on the 9th of June, 1961 only four days after celebrating her 91st birthday. A few days later over two hundred mourners packed Scots Church in Collins St including relatives, friends, RSL members and representatives from Elsey Station Ltd and Angus and Robertson book publishers. The Rev A Crichton Barr told those gathered: ‘Mrs Aeneas Gunn was a modest, gentle and courageous lady. Some people will remember her for her books and others for her unremitting service to those who fought for Australia. She will be remembered by many people with gratitude and affection’.(130)

Jeannie Gunn was buried in a simple grave at the Melbourne General Cemetery alongside the two sisters she had shared a home with. Her estate, including book royalties, was estimated at her death to be over £12,000.(131)

This article is reproduced from AJ McAleer's Introduction in 'MY BOYS', A Book of Reflection written by Mrs Aeneas Gunn OBE and published by Monbulk RSL Sub Branch.