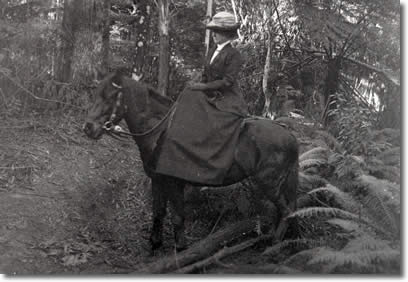 Mrs Gunn riding through Monbulk on her favourite pony 'Jet'.Her one solace came from travelling with her father to his property in the Dandenong Ranges at Monbulk where a group of pioneer settlers were struggling to establish themselves on small selections. Mixing with these families she soon recognised in them the same sort of pioneer spirit she had left behind in the Territory. A long-time friend, Mrs Hilda Lane, first came to know her during this period when she visited with her father. She recalled she had a ‘deep attachment for the early pioneers and as a teacher took a great interest in the children and their parents’.(16) She would often be seen riding about the hills, sometimes in the company of Robert Hughes the forestry ranger, and took part in ceremonies at the church and the school.(17)

It was around this time that friends and family began to encourage her to write down some of the outback stories she had so enthralled them with in her letters home. She started to do this by jotting down the experiences and adventures of the small girl who had enchanted her so much at the Elsey, young Bett Bett. Her first manuscript was entitled The Little Black Princess which she gave to Mr Leonard Slade of Kalorama, a man she would later refer to as her ‘literary Godfather’.(18) As Mr Slade was the manager of the book department of ‘Melville and Mullens' she valued his opinion. He in turn read the story to his children who enjoyed it thoroughly. Inspired by this she sent the manuscript on to a firm in London who published it on a half profits basis. This unfortunately later meant that in order for her to recover the rights for a larger distribution by an Australian company she would have to pay the London company £15.(19) Once printed however The Little Black Princess went on to become known as the ‘Peter Pan of Australian Literature’.(20)

It is also considered by many to be the first really sympathetic story of Aboriginal life. The Commonwealth Official Year Book of 1910 called it: ‘the most truly artistic and sympathetic description of an Aboriginal character ever written’(21) and the notable scientist Baldwin Spencer wrote: ‘only one who really understood and liked the natives; and who, at the same time, was liked by them, could possibly have written it’.(22)

In fact the main character, young Bett Bett, actually visited Mrs Gunn in Melbourne in 1907, not long after the release of the book.

At the time Bett Bett was working as a nanny for the Ward family of Darwin, who had brought her with them on a visit south.(23) Bett Bett begged Jeannie to allow her to stay with her at Hawthorn but, ‘I was afraid of the climate and all the difficulties here for her upbringing and her future’(24) and thus she returned sadly to Darwin.The sudden popularity of her book inspired her to sit down and write a second book, this time on her life and observations of her exciting year in the Northern Territory. Although classed as a novel, it is really a history of this period recreating actual events and her description of those involved with these events. At the same time the story shows her evolution towards both acceptance and assimilation of the conditions that came with life on this outback station. She chose however to cover the real identity of those involved by referring to the characters' nicknames, with the result that the Maluka, the Fizzer, Cheon, the Quiet Stockman, the Sanguine Scot, the Dandy, Mine Host and of course the Little Missus were to be given immortality on the pages of the book she would proudly title We of the Never Never. The finished product captures such an intimacy with these characters and leaves such a deep impression that the book can easily stand as a memorial to this generation of men who quietly, under extreme conditions, helped forge our nation. 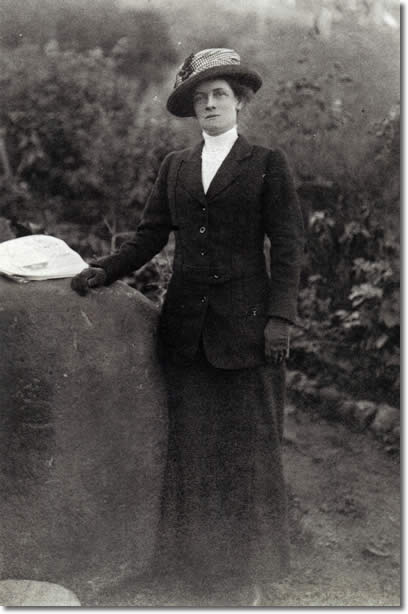 Mrs Aeneas Gunn in 1910She wrote the book between Hawthorn and Monbulk(25) and once it was completed she spent a number of years surprisingly trying to find a publisher for it. After six rejections We of the Never Never was finally printed(26) but not before the publisher forced her to use the more masculine title of ‘Mrs Aeneas Gunn', fearing a female author would not generate as many sales as a male writer. However as soon as it was published Australian readers en masse adopted the story as part of their cultural heritage. Eventually it went on to be considered an Australian classic and has the distinction of being constantly recommended as a text book for school students as well as being transformed on to the big screen as a feature Australian film. Today it is estimated 300,000 copies of The Little Black Princess have been sold world-wide while We of the Never Never has reached sales of 600,000 copies. Both have been translated into a number of foreign languages.(27)

During this time Mrs Gunn began to only feel at home in the wide open spaces and was soon spending more and more time away from life in Melbourne at Monbulk. Her niece, Mrs Margaret Berry, believed: ‘Monbulk thus supplied her need for a respite from city dwelling, and I think this is why Monbulk has always remained so close to her heart. She could write in the peace and calm of the country’.(28)

At Monbulk she enjoyed visiting the various settlers and their families and often stayed with the Simpson family who even referred to the room she regularly slept in as ‘Mrs Gunn's Room’.(29) Here she was a familiar sight, riding side-saddle around the district, on her favourite pony, Kit Simpson's ‘Jet’. On one occasion she came across a camp of disused buses which had been furnished and placed on the property of Mr John Roberts at Kallista. The ‘Bus Camp' had become a home for a number of artists and writers including C J Dennis, Hal Gye, Web Gilbert, Tom Roberts and David Low, and here she would sit for hours with these interesting men of the arts and discuss topics and swap stories.(30)

At the same time she corresponded with Alfred Searcy and encouraged him to publish a book on his knowledge and experience of life in the Northern Territory(31) and inspired and motivated a young John Flynn whose ideas of helping those in the outback through air travel developed into the Royal Flying Doctor Service.(32)

In 1910 she began to write a third book which was going to be called The Making of Monbulk. She travelled the area researching the details and took the information away with her on an overseas trip to Europe which was to last three years. She visited England, France, Belgium, Switzerland and Italy. Mrs Berry later recalled: ‘On the ship bound for England, she would rise early to work for an hour before breakfast, and again after breakfast till lunchtime. She worked for specified hours while staying in hotels in Italy and elsewhere. However she seemed to be having some difficulty in getting the right atmosphere and felt that she needed the ‘influence of the local environment' and the ‘scents and sounds of the bush' which only Monbulk could provide’.(33) The book unfortunately was never finished and the uncompleted manuscript was later lost.

Arriving back in Melbourne in 1913 she set up home with two of her sisters and to Mrs Berry's recollection: ‘the household consisted of three middle-aged very abstemious ladies’.(34) Jeannie however was the Aunt a young Margaret Berry had most fun with and always found her: ‘intensely serious yet full of humour, conservative while defying conventions, courageous but reserved. She could be up in the clouds, though practical and down to earth’.(35) Another time Margaret recalled to a reporter: ‘When she taught me the polka, Aunt Jane kicked out her heels in a way that was considered to be just a little daring for a woman in those days’.(36)

Later in 1913 summer bushfires swept through the Dandenongs leaving many from Monbulk injured and homeless. Among the first to arrive with help was Mrs Gunn who assisted the victims with food, clothing and money.(37) One resident whose family were a part of those pioneering days, Richard Bowman, remembered: ‘She was a very nice lady who helped a lot of people who were financially in need of help and had got into trouble. If they were down and out or in trouble she would help them all and would see them through. I don't know the exact details of those she helped as she wouldn't pass on the information anyhow’.(38)

This would not be the only time Mrs Gunn would come to the assistance of the people of Monbulk. In fact over the coming years as the ensuing ‘Great War' cast its dark shadow over the township, she would come to the fore to support and console the Monbulk community with such devotion and compassion that she would earn for herself a permanent place in the hearts of those who lived there.