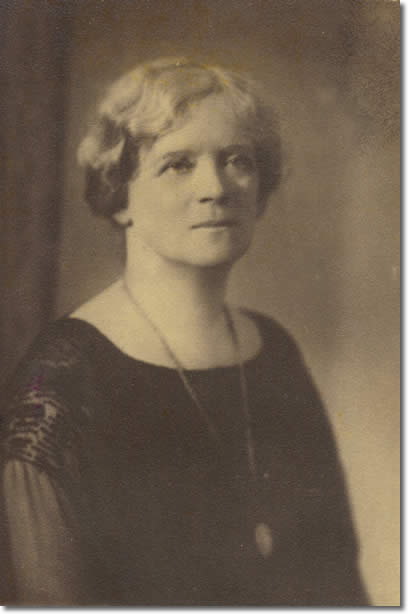 THE STORY OF MRS AENEAS GUNN

"THE DIGGERS' HEROINE OF MONBULK"(1)

When time is no more for her, her name will continue to echo and resound for many generations to come.

She was born Jeannie Taylor on June 5th, 1870 at a nursing home in Lygon St Carlton. Her Scottish father, Thomas Taylor, was the son of the Reverend James Taylor, the Minister of the Baptist Church in Collins Street, yet unlike his father Thomas opted to become a freelance journalist, working on most of Melbourne's papers before settling in a permanent position at The Argus(3). Jeannie was the youngest of the Taylor's six children and because of financial restraints was not able to attend school like her elder siblings. As a result her education was tutored to her at home by her mother. Mrs. Taylor however, obviously had a talent in this area as Jeannie was eventually successful at passing her matriculation, although an earlier attempt saw her fail, of all subjects, English(4) .

In 1888 Jeannie, along with two of her sisters, opened a private school in Hawthorn they called ‘Rolyat’ (a reverse of Taylor) which at some stages held an attendance of up to fifty and sixty pupils.(5) Past students here would include war correspondent Philip Schuber(6) and a later stalwart of the Monbulk community, Mrs. Kathleen Wellington, who later recalled that each morning: ‘her light springing footsteps could be heard first on the flight of steps from the garden, and then along the verandah outside the classroom’.(7) During 1896 the sisters agreed to close the school down and as a result Jeannie took up a position as a visiting teacher, working at a variety of schools and tutoring in a variety of subjects.

While she was undertaking this vocation an event occurred that would eventually effect and shape the rest of Jeannie's life. While staying with friends at Narre Warren, she and another girl decided to attend a New Year's Eve concert at the town hall. On arrival she was thrown from her buggy and straight into the arms of a ‘long-legged Scot' named Aeneas Gunn.(8)

Aeneas Gunn had been born in 1862, the son of the Reverend Peter Gunn, Victoria's first Gaelic preacher. By the age of thirty-nine he had already lead an adventurous life in a variety of occupations including naturalist, navigator, seafarer, journalist, cattleman and scientist, and had been for a number of years a Fellow of the Royal Geographical Society. He had spent much time in the outback, having explored the Northern Territory with his cousin, Joseph Bradshaw, and scientist, Alfred Searcy, and had helped to establish properties at Prince Regent River and on the Victoria River.(9) At the time he met Jeannie though, he had been back in civilisation for two years working as a librarian at the Prahran Library.

It was not surprising then that the Librarian would easily establish a rapport with Jeannie who was known for her great love of books. A relationship soon developed and eventually they married on the 31st of December, 1901 with Presbyterian forms at ‘Rolyat’(10) . Just before this however Aeneas had agreed to take up the position of manager at the Elsey Cattle Station on the Roper River, some three hundred and fifty miles south of Darwin. On the 2nd of January, 1902 he left Melbourne with his new wife on the SS Guthrie to travel to Darwin to begin his job as the station's new manager. 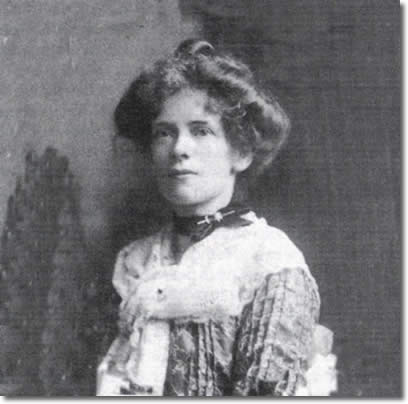 Jeannie Gunn in 1902Jeannie had brushed aside well-meaning warnings about accompanying Aeneas to the harsh outback, but all five feet of her had always had a determined streak. A nephew, Dr Harry Derham, later recalled: ‘Once she had made up her mind about something, you might as well give in, because you weren't going to win’(11) , Jeannie had decided it was her duty to be by her husband's side in the Territory and therefore that's where she would be.

The Territory however had always been considered a man's world and news of her arrival in Darwin and subsequent travel to the station caused an alarm amongst the tough stockmen of the Elsey, who even attempted to stop this lone female invasion by forwarding telegraph messages to prevent her coming. This wasn't enough to discourage Jeannie from reaching her destination, but the ensuing wet season almost did. She was forced to travel most of the way by buggy carrying only her most essential items.(12) In fact her book collection had to be left behind and she was only able to take one of her books with her of which she thoughtfully chose The Complete Works of William Shakespeare.(13)

The Elsey Station was in a remote part of the Northern Territory known locally as the ‘Never-Never’. When she arrived the homestead itself was a run down, somewhat comfortless bush dwelling, made worse by a recent cyclone, which Jeannie set about trying to transform into a home for herself and her husband with the help of a good natured Chinese cook and a number of Aboriginal house girls. From the start she found all aspects of the station life absorbing and entertaining and did her best to assimilate into the lives of these forgotten pioneers who were dredging out a livelihood in a land which few Australians at that time even knew existed.

She took a genuine interest in the lives of the local Aborigines, who drifted into the station and had a true sympathy and affection for their way of life, which few white people expressed in those days. One native in particular she befriended was a young eight-year-old girl called ‘Bett Bett’ to whom she gave the regal title of ‘The Little Black Princess’. Bett Bett had a temperament Jeannie could warm to and a mischievous and superstitious nature which appealed to her sense of humour. She would study her frolics and adventures which she would then describe to those at home through her many and regular letters.

The stockmen however were not as easily won over. These strong, shy, retiring men who had chosen a career which withdrew them from civilisation had become intolerant of anything that wasn't an accepted part of their lifestyle, which included intrusions from women. But Jeannie's friendliness and humour as well as her personal courage and refusal to complain showed these rugged bushmen that she would, like them, accept and make the best of the conditions. It was this attitude along with her determination that would in the end earn for her their respect, admiration and lifelong friendship. 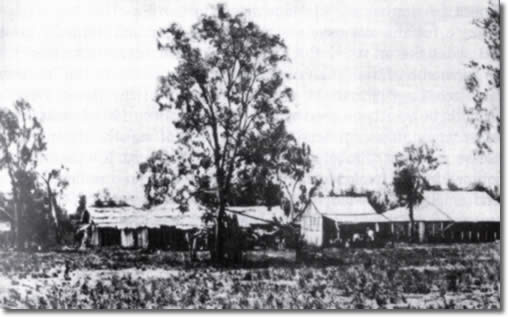 Elsey Station in the Northern TerritoryFor almost twelve months Jeannie lived and learned a great deal about life on the outback station and eventually came to enjoy the experience. However an unfortunate aspect to life in the Territory was often tragedy and she would, like many of the Never-Never's bush folk, be greatly touched by this. On March 16th, 1903 Aeneas Gunn passed away after contracting a severe bout of malarial dysentery, a disease prevalent throughout the Northern Territory. His passing was mourned by the stockmen and Aboriginals alike who considered him a good employer, ‘the best Boss that a man ever struck’.(14) But none mourned more than Jeannie, her beloved husband whom she knew for only a short time. Aeneas Gunn was buried at Elsey Station and the following month she travelled to Darwin and eventually back home to Melbourne.

Arriving in Melbourne she moved into her father's home in suburban Hawthorn and tried to pick up the pieces of her now shattered life. In the city however she longed for the quiet bush life she had left behind and wrote: ‘We who have lived in it, and loved it, and left it, know that our hearts can never never rest away from it’.(15)